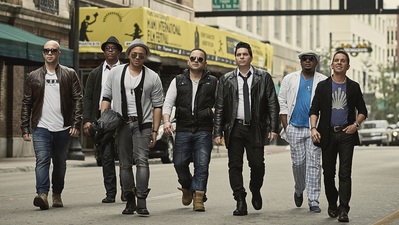 “So hot and danceable that even when you talk about the group, you find yourself moving your hips.” – Richmond Times Dispatch

One thing is for sure: the members of Tiempo Libre are living the American Dream, playing their exhilarating, joyful music to packed houses. The members of Tiempo Libre grew up studying together in the classical music conservatories of Havana. Dreaming of freedom and opportunity, the seven musicians moved to the U.S., getting together in their “free time” (tiempo libre in Spanish) to play Cuban timba music - an irresistible and exuberant mix of jazz harmonies, contemporary sonorities and seductive salsa rhythms. Today, with worldwide concert tours and albums released by leading record companies, these world music troubadours feel lucky to have very little free time.

Tiempo Libre’s 2009 groundbreaking Sony Masterworks recording, Bach in Havana takes Bach as a starting point from which to explore a wide range of Cuban music forms and rhythms.  The recording features guest tracks with Yosvany Terry and Paquito D’Rivera and earned the group its third Grammy-nomination.  It was described as “A landmark recording in the sense that Miles Davis’ Kind of Blue was approximately 50 years ago” by The Latin Jazz Network.  Bach in Havana is a true reflection of the two worlds of Tiempo Libre’s Cuban musical upbringing.  Tiempo Libre’s seven members led “double” lives studying classical music at Cuba’s premier Russian-style conservatories by day and by night meeting up to play the music of Cuba including timba, Latin jazz, and the rumba.

Tiempo Libre’s 2011 recording, My Secret Radio, pays homage to Tiempo Libre’s teenage years in Cuba, a time when the government forbade its citizens to listen to American music, and Russia pulled its support from the island.  Inspired by their Afro-Cuban tradition, but eager to catch the new trends and sounds coming from the U.S., Tiempo Libre’s members would fashion homemade antennas to secretly listen at night to the music pulsating from Miami radio stations. These secret radio sessions fueled Tiempo Libre’s dreams of living in America, free to perform their songs and build the careers they wanted, while helping them gather the strength that it took to leave it all behind – families, friends, a country, a life – to pursue those dreams. My Secret Radio, and the inspiring story behind it, has been featured on Fox News’ Real American Stories, CNN en Español, PRI’s The World, and in Mother Jones and People En Español.

In 2015 Universal Music Latin Entertainment in partnership with Universal Music Classics, the group released Panamericano. Tiempo Libre premiered two singles from Panamericano, “Dime Que No” featuring guest artist Jean Rodriguez, and “Somebody to Love Me,” with Yunel Cruz.   Additional guest artists include Descemer Bueno, Frankie J, and Luis Fernando Borjas. “We have always written songs about our lives – both past and present. We are surrounded by people and influences from all over the Americas who inspire us, and the featured artists on Panamericano reflect that amazing diversity and inspiration. Their 2018 independent release, Lo Que Te Toca continues in that tradition with virtuosic musicianship and exotic rhythms guaranteed to get your toes tapping!

Ambassadors for Cuban music around the world, Tiempo Libre have gained new audiences through appearances on shows such as the Tonight Show, Live from Lincoln Center and Dancing With the Stars and through concerts worldwide including performances at Tanglewood, the New Orleans Jazz & Heritage Festival, the Playboy Jazz Festival at the Hollywood Bowl, Jazz at Lincoln Center, Jazz Cafe in London, Hong Kong’s Kwai Tsing Theatre and Tuscan Sun Festival in Cortona, Italy. Tiempo Libre frequently draws on its classical training to play with leading orchestras, including the Cleveland Orchestra, and the San Francisco and Houston Symphonies. They have collaborated with artists such as Joshua Bell, Gloria Estefan, James Galway and Paquito D’Rivera.

Every Tiempo Libre concert is a party, a celebration, and – regardless of whether “guests” choose to enjoy their sophisticated sound from their seats or on the dance floor – all engage all in exhilarating shared experience of community.